How did “punk” break? As a genre that is predominantly political and aggressive, punk music influenced many bands that would later become recognized by large media outlets and award ceremonies for their contribution to the advancement of music, specifically rock-oriented genres. As such, New York City noise-rock group Sonic Youth formed in 1981 with the intention to test the limits and expectations of punk music. With their transgressive attitude and experimental styles, Sonic Youth has become recognized as one of the most influential bands in the history of music. Most notably, they have been credited for bringing attention to genres such as grunge, shoegaze, and post-rock.

With their 1990 release, Goo, Sonic Youth departed from the cultural expectations of punk, often critiqued for “selling out” and causing other bands to do so as well. However, with Goo, Sonic Youth has expanded the reach of the counter-cultural politics that is present within their lyrics through their use of media marketing and the rhetoric of their sonic presence. 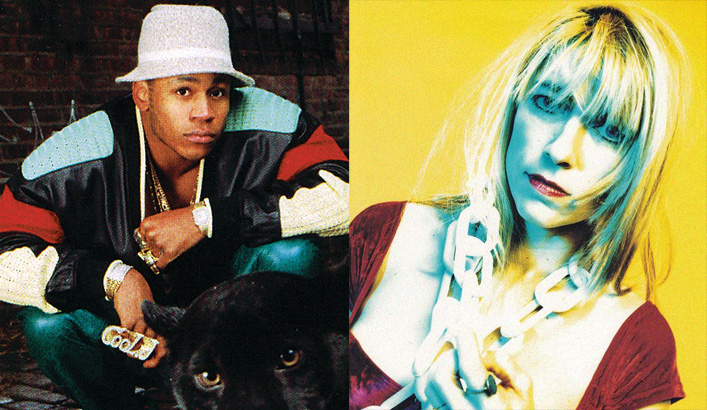 Undoubtedly, the stand-out single from the album is “Kool Thing,” a tongue-in-cheek interpretation that Sonic Youth bass player and singer, Kim Gordon, had about her interview with LL Cool J. Throughout the interview, she steers the conversation towards uniting underground cultures together through sonic approaches, dissimilar, yes, but with potentially similar aims: counter-cultural critique.

In “Kool Thing,” Gordon posits herself as reproducing the cultural ideals that she is so against. She sings: “When you’re a star / I know that you’ll fix everything” (Genius). Aware that she had reached the point of underground stardom from her band being signed to a major label, Geffen, she re-iterates the expectations that she has for herself and other “stars.” Furthermore, she acknowledges this in a reassuring way, possibly to relate noise-music even closer to hip-hop, by viewing herself as a contemporary to LL Cool J. Is this her “ethos”? Is this Sonic Youth’s ethos?

By exploring the album using sound studies, or sonic rhetorics, I will analyze the lyrical and sonic presence on the album. Primarily, I will be applying the constructed aspects of noise aesthetics that Rickert and Salvo developed in “The distributed Gesamptkunstwerk: Sound, worlding, and new media culture” by viewing it as:

“ghosts—musical or otherwise—are intertextual residues, or traces of an excess that will
not be repressed or “squeegeed.” While Hendrix was not the only one developing such new
aesthetics, Hendrix’s influence in particular has been massive, to the point where scores of
artists, such as Sonic Youth, Glenn Branca, My Bloody Valentine, Ride, Sigur Ros, and more, ´
have formulated entire feedback-based aesthetics. While not all artists go so far, it has at least
become a commonplace to incorporate formerly unacknowledged if not illegitimate forms of
sound and label them legitimate, thereby reimagining noise as input” (300).

This, according to Rickert and Salvo, is one function of the “worlding” process, where “new media and its technologies are differentiated from text” (299). Moreover, the concept of worlding is crucial to my rhetorical analysis of the material, which aims to address questions like how does Sonic Youth address sexism, racism, and economic issues in Goo? What are the persuasive elements that the album embodies, and how are these qualities expressed through the material? How does Sonic Youth “world” their album?